01: The CSE won’t uninstall or allow in-place upgrade. What should I do?

This isn’t a problem, per se, with the PolicyPak CSE. This is a problem with the MSI database that contains the contents of what is registered or not.

One QUICK FIX we have seen is: Rename the NEWEST CSE you get from us to something unique. For instance, PolicyPak-CSE-SETUPx64-BUILD12345.MSI, then re=try your upgrade. We have reports that this “magically fixes it” by fooling the MSI database.

If that doesn’t work….

You might see a dialog similar to this when trying to install/uninstall. And, even if we (PolicyPak) provide the previous version to you, it is still likely that the CSE wont uninstall. 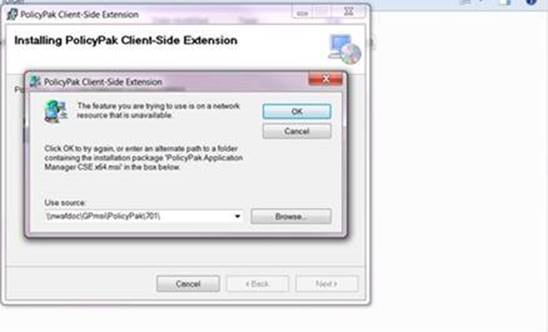 Try this first on ONE machine:

Microsoft has a one-off “Fix it” to fix broken MSIs which get stuck.

If the above does not work then try this on ONE machine:

To fix and remove existing CSE version to allow a re-installation of the newest CSE:

Then launch it and select the CSE version and click Remove 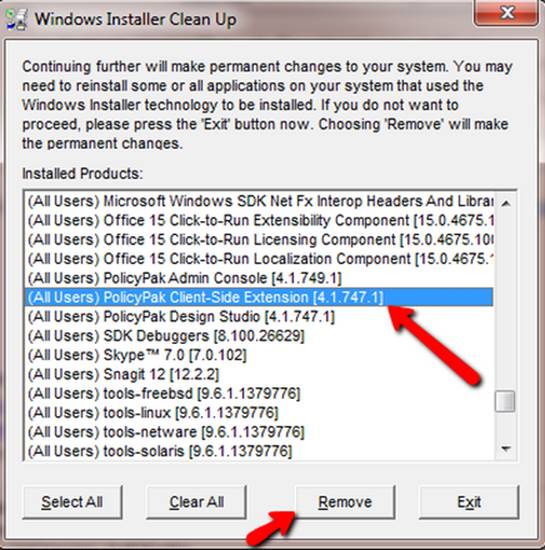 Then manually install the latest PolicyPak CSE, and verify it worked as expected.

The tool we recommend to get the PolicyPak CSE “out there” if you don’t have another tool already is PDQ Deploy (https://www.adminarsenal.com/pdq-deploy/)
There is a FREE and PAID version of the tool; you can use either.

The included is a batch file which will perform the uninstall…using MSIZAP. It only works if you put the OLD versions in some place it can find it. You’ll see if you open up the Batch file which is much clearer.

TIP:If the batch file needs updating and doesn’t contain the MSI codes for the version you are trying to uninstall, please work with your support rep who can get that updated for you.

Then, again, the suggested next steps are: