02: What must I do to prepare for PolicyPak Tech Support to assist me with Pak creation?

If you have a situation which required PolicyPak Tech Support to help you update a Pak from your own system, these are the instructions.

To use the PolicyPak DesignStudio, you will need the following components pre-installed on your PolicyPak Creation Station. The machine you put these components on should match the END-POINTS you wish to deploy your Pak to.

NOTE: It’s best if the PolicyPak Creation Station is a machine that you can use and re-use again. We suggest you use a virtual machine loaded with the following components, which you can then “restore” to “snap back” to this original configuration before creating each Pak. This idea is borrowed from creating MSI or App-V packages. You want a clean machine with only the PolicyPak Creation Station utilities before installing your package and producing a Pak.

Figure ‎1.3: …or Visual Studio 2013 Express. Be sure to select only the “Visual Studio Express 2013 for Windows Dekstop” option. 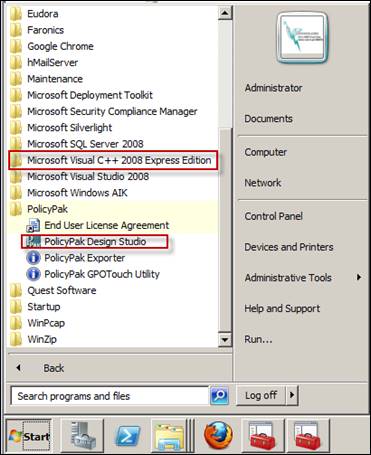