03: How do I use the Filter section in PolicyPak Least Privilege Manager ?

The Scope filter section can be found in various rule types in PolicyPak Least Privilege Manager. For instance, it exists in every explicit rule, like this: 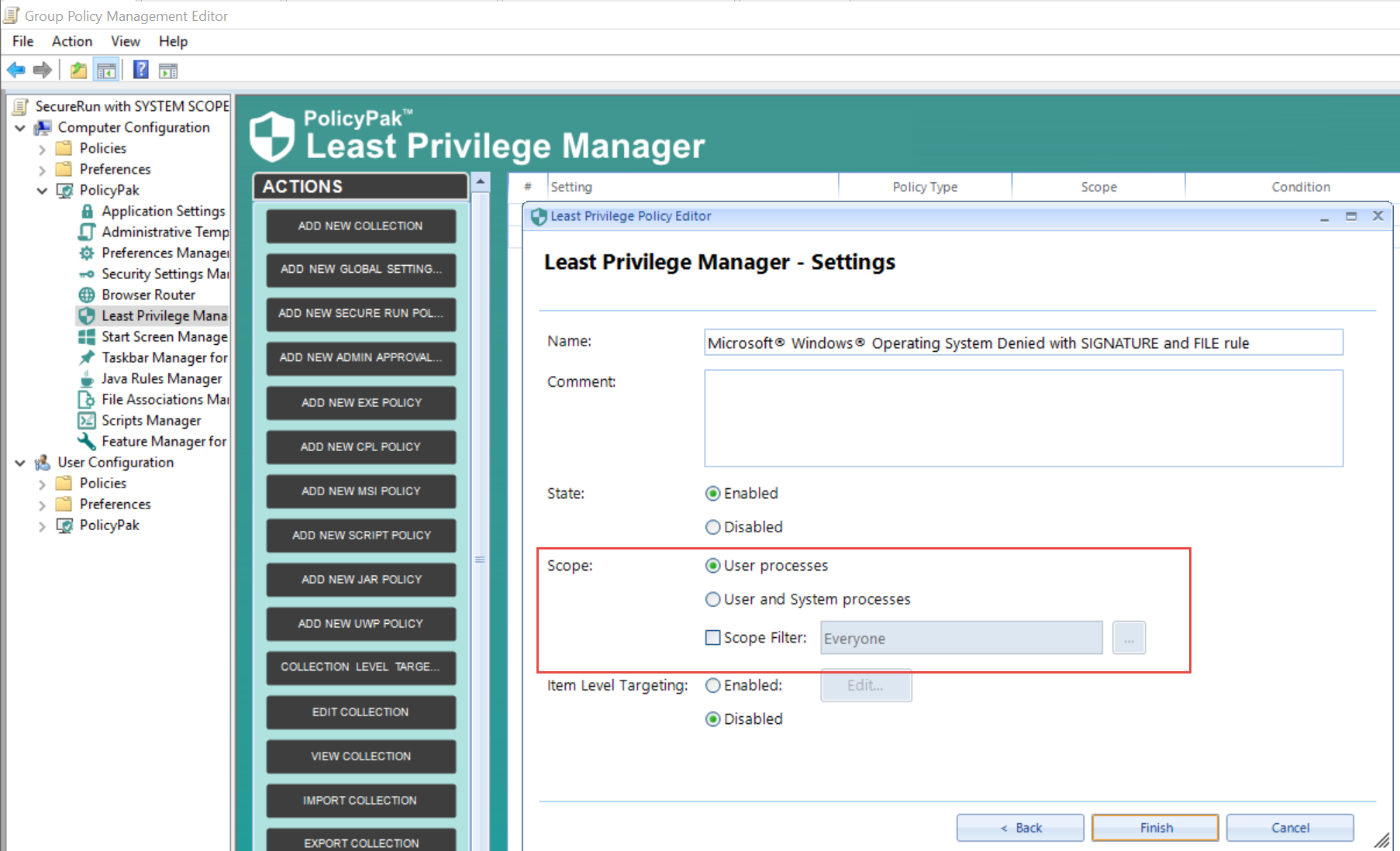 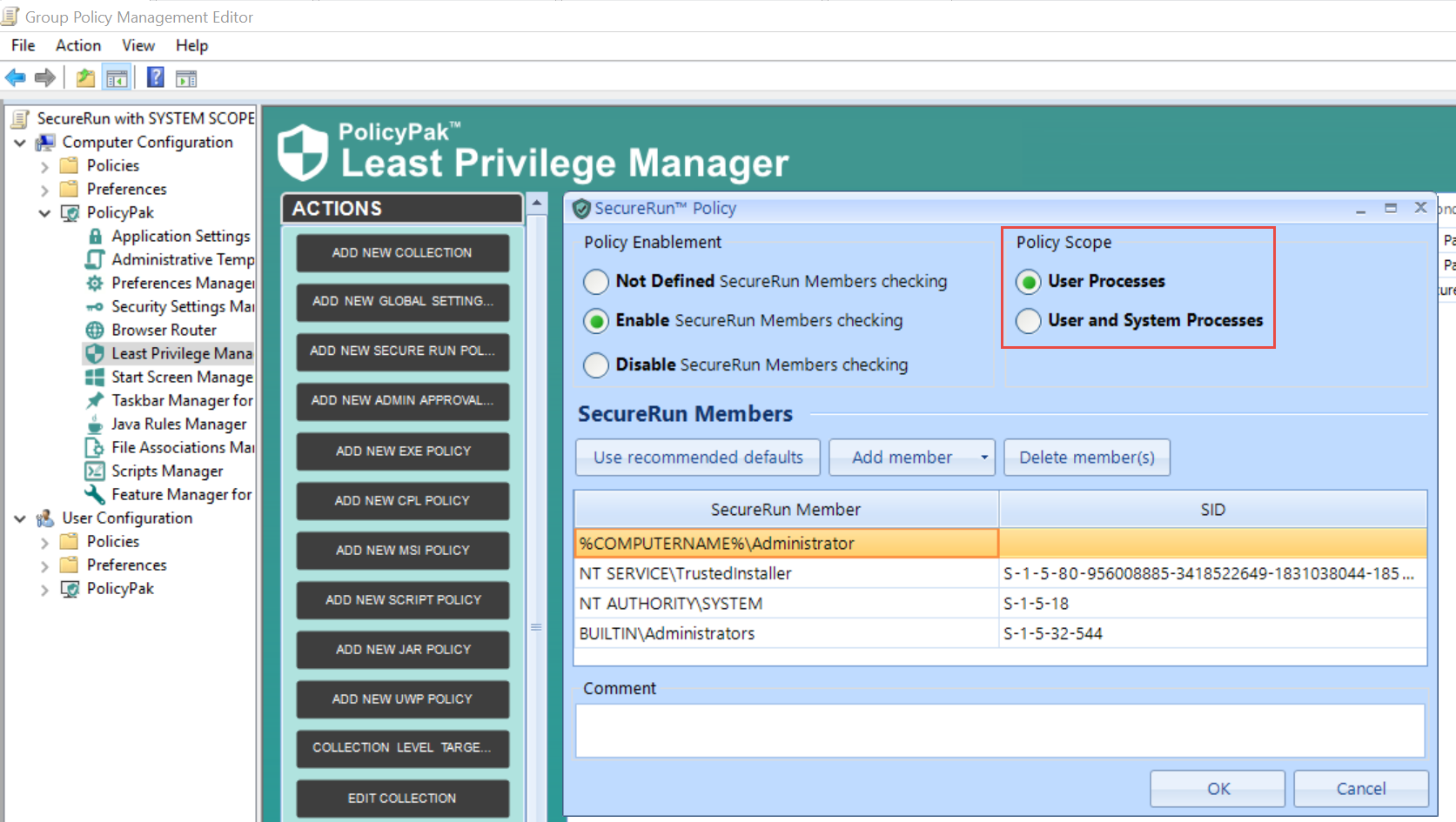 Note at this time, Policy Scope rules are not yet available for:

These are coming soon.

Note that the Policy Scope option is only available when used on the Computer side; on the User side it is greyed out because this setting is only meant to express to the COMPUTER (system) how to work with User and User and System Processes. On the User side, the processes are always in the context of the User. 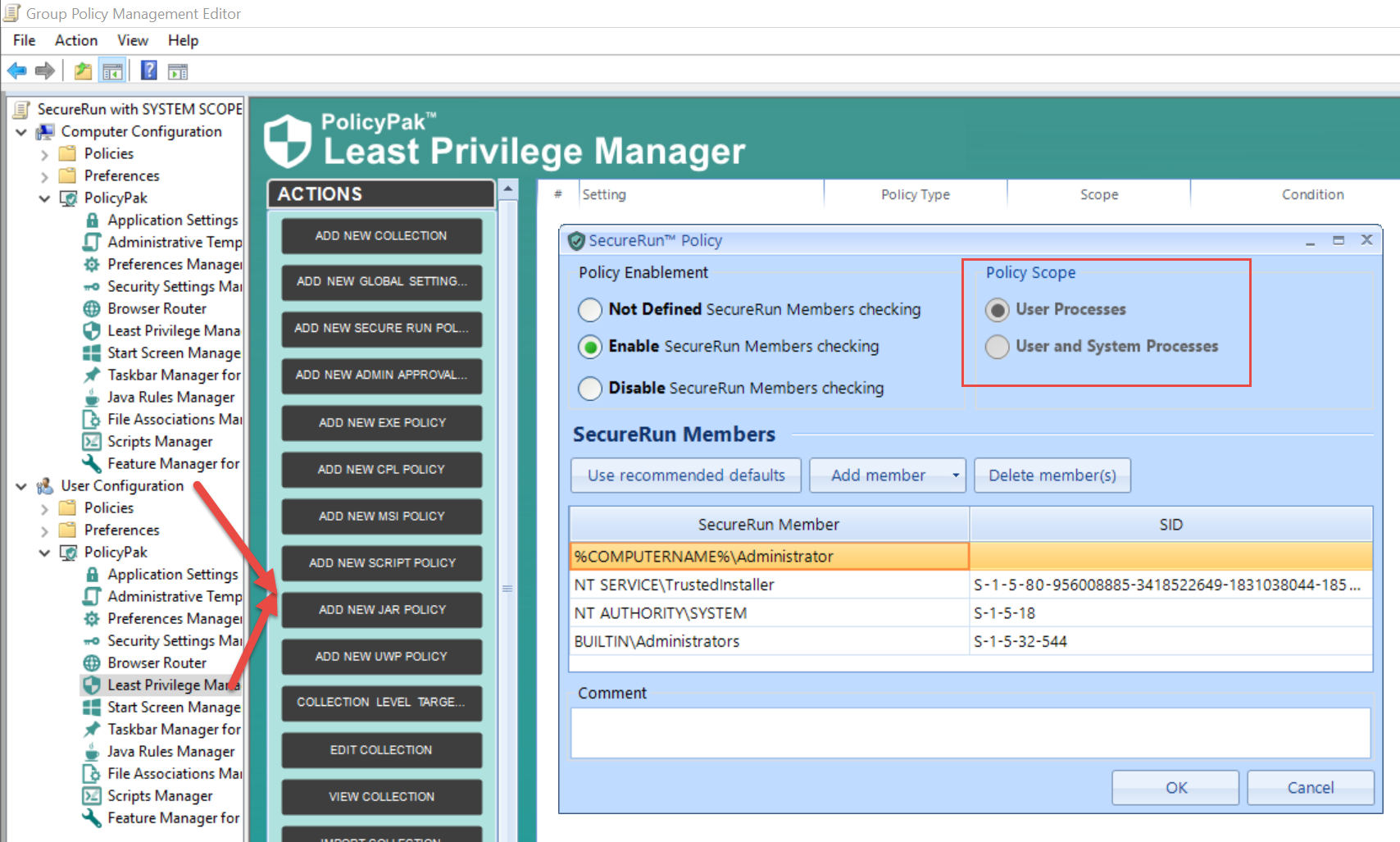 In this document, we’ll explore various use cases when you might use the “Policy Scope” option (which again, will only be un-gray / valid on the Computer side.)

When you apply SecureRun on the user or computer side, you’re saying “Block all untrusted executables started by users.” This doesn’t (by default) block the attack vector of the System performing the attack. You can see the example below where the Standard User is blocked from an executable attempt, but System is still allowed. 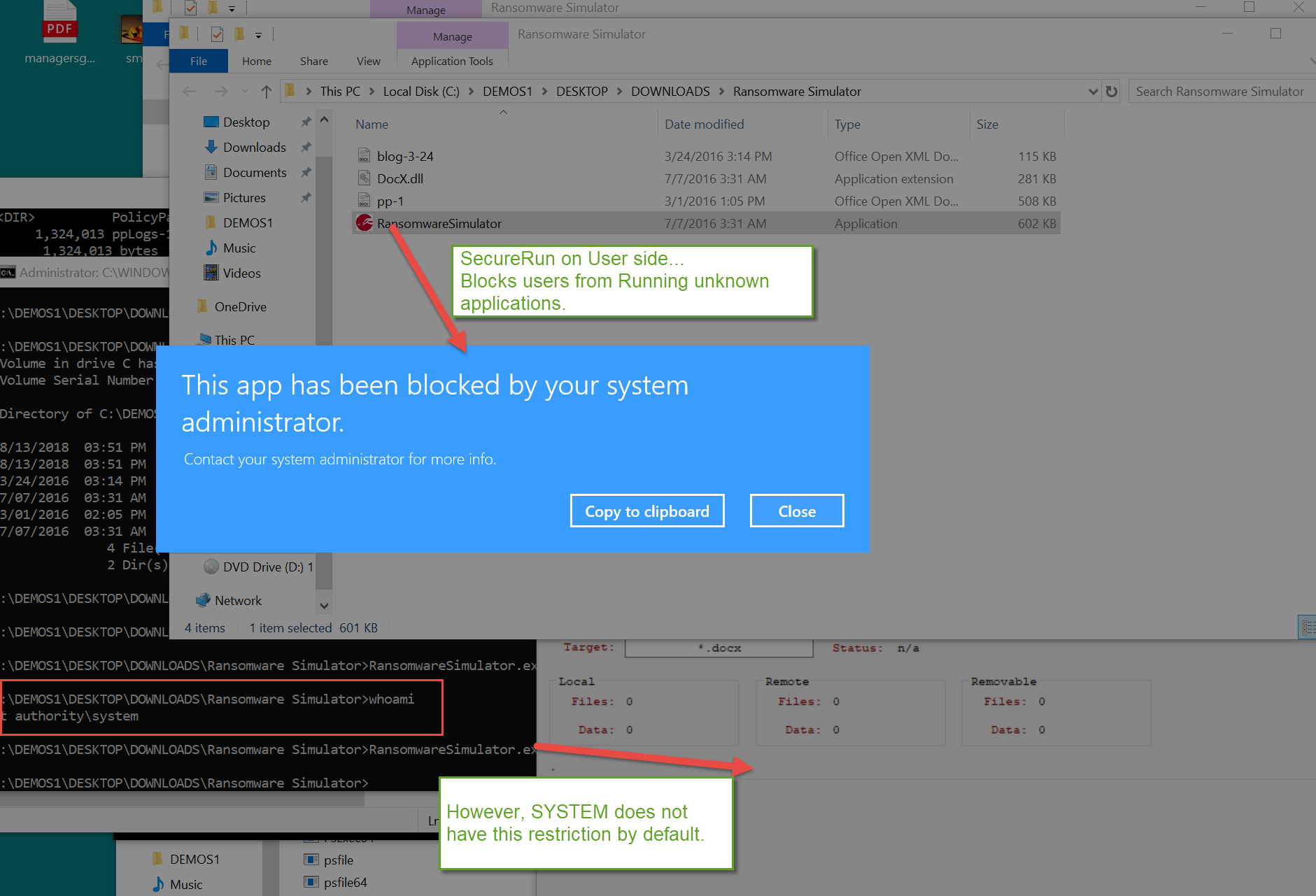 However, you can switch SecureRun on the computer side to now say “Block all untrusted executables started by users or LOCAL SYSTEM.” You would do this on the Computer side, and specify User and System Processes like what’s seen here. 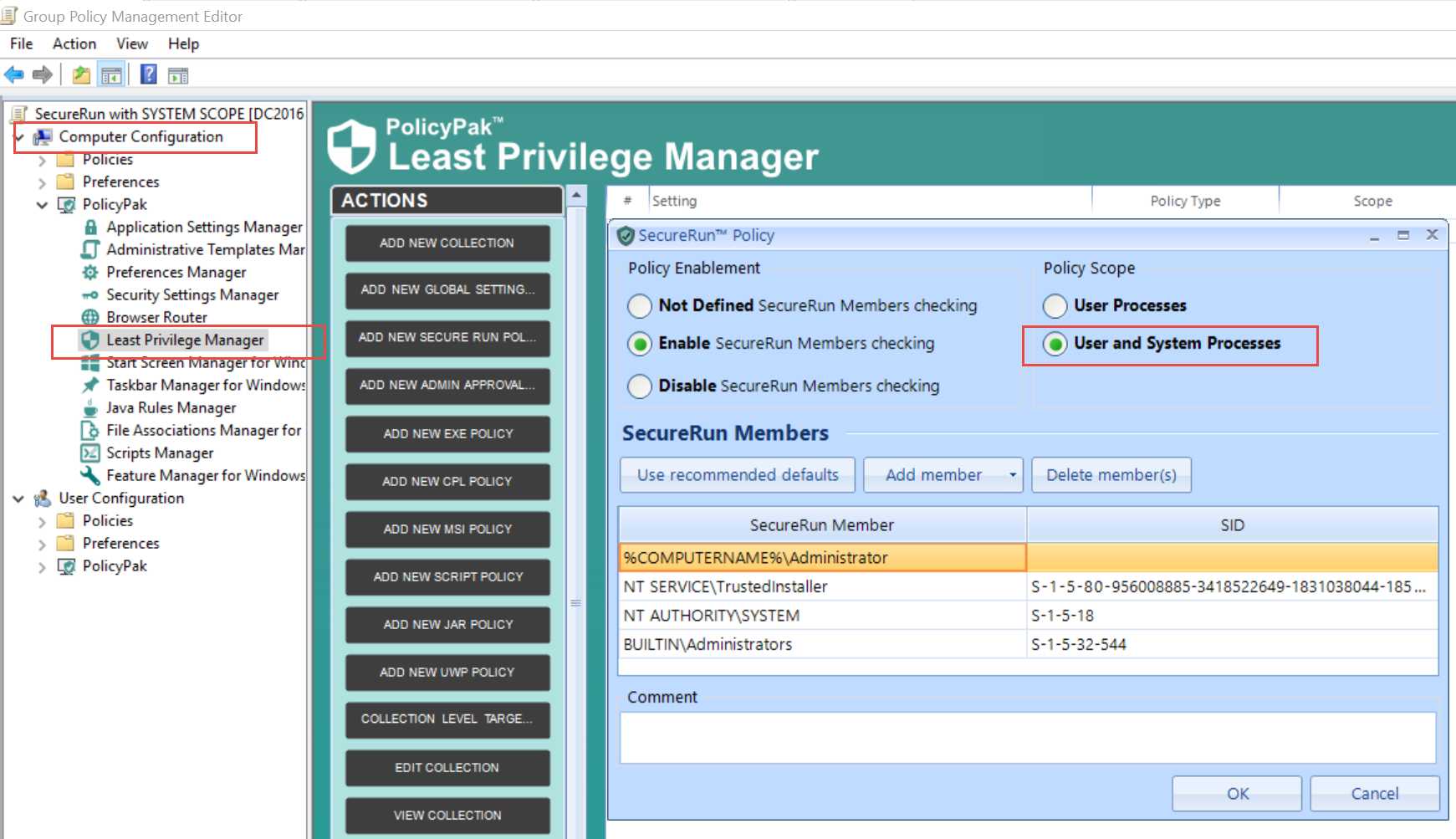 The result is that both User and System attempts to run un-trusted executables will be prevented.

When could this occur?

- If a normal (user-level) process exploits a security vulnerability to escalate his own privileges and run some arbitrary code with HIGHER privileges (like LOCAL SYSTEM in this case.).

This would strengthen security if a malware ended up using an elevated process to attempt to perform its work as LOCAL SYSTEM and tries to run an un-trusted file. Therefore, when the application (.EXE) or script, etc was attempted to fire off, because the user isn’t on the SecureRun trusted list, the attack attempt will fail.

Scenario 2: Specific rule to block an app from being run, even as local System.

You might to explicitly block attack vectors such as PSEXEC (which was used in WannaCry) or entirely block PowerShell.  If you specify to do this only on the User side (or set Computer side scope to User processed only) then only user processes will be affected like what’s seen here.

In the previous example, we blocked Powershell (or PSEXEC, etc.) from all user and system processes.

However, you might need to run some Powershell scripts as SYSTEM to perform some maintenance tasks.  Since PowerShell is now being blocked for all Computer side processes, you cannot run a specific script with PowerShell like what’s seen here.

To enable this, simply add another rule to ALLOW AND LOG, for example, C:\SCRIPTS\ITSCRIPT1.ps1 and set the scope to User and System processes, but use the scope Filter to SYSTEM.

Scenario 3: Running or Elevating applications or installers, but blocking other admins from running them.

In this scenario you want to do work with PolicyPak Least Privilege Manager (Elevate, Allow, or Block) but prevent other admins (local admins or domain admins) from overcoming your rule.

To perform this, you’ll need to do the following:

1. First one BLOCKS ABC.EXE or ABC.CMD or ABC.MSI. This must be done on the COMPUTER side with SCOPE = USER AND SYSTEM. Then, filter the scope by group (more on this in a second.)

2. Second rule ALLOWS or ELEVATES ABC.EXE or ABC.CMD or ABC.MSI. Scope doesn’t matter. You can do this on the COMPUTER or USER side. (leaving the default filters in place.)

If you want to …. Block only LOCAL admins (but not domain admins) then Rule #1 needs to look like this. (Note that this group is not available when editing a GPO from a DC, and only available when creating the GPO from a Windows 10 computer.) 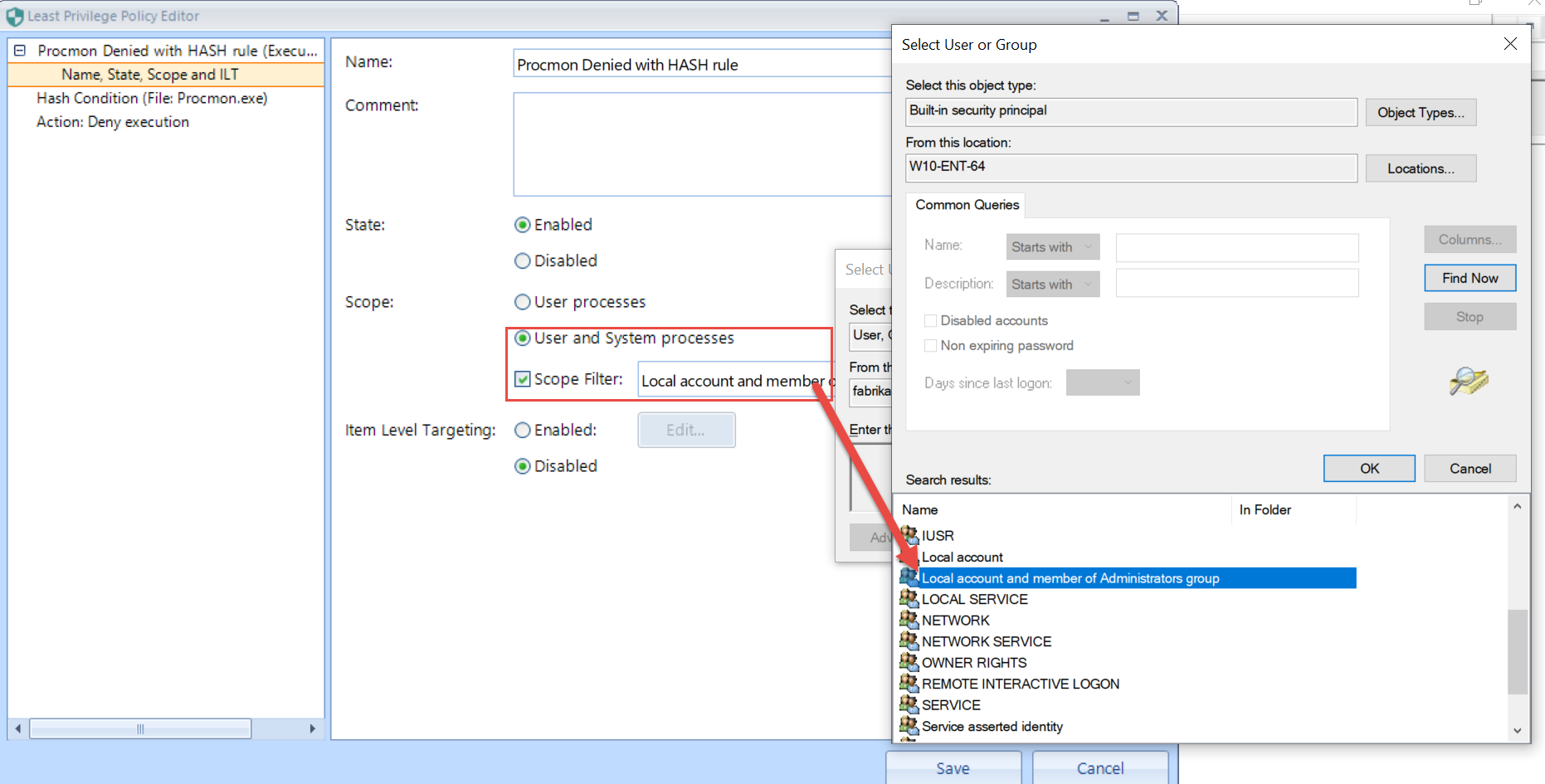 If you want to… Block both local admins and domain administrators then Rule #1 needs to look like this. 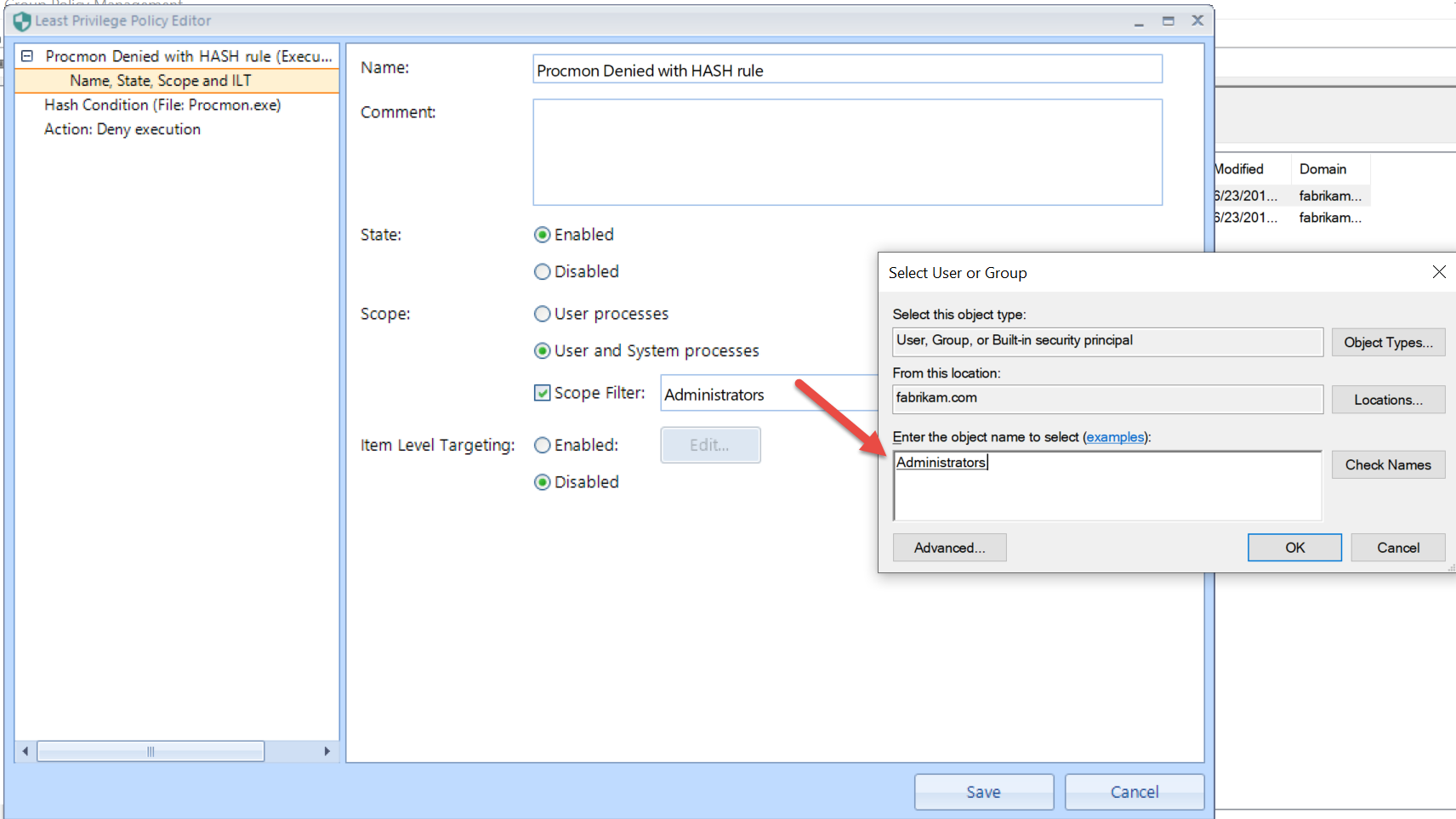 Again, rule 2, the rule that does the ELEVATE or ALLOW, is just a standard rule, and can be done on the user or computer side, like this.

You might have a service which requires specific privileges. Maybe your service, by default, uses Local System, and you want to give it LESS rights.

With PolicyPak Least Privilege Manager, you can remove the powerful privileges of the service account and strip out LOCAL SYSTEM and grant a specific user the permissions required.

If you want a process to be run via special user account you would need to do the following:

1. Make a rule for an .exe from which the service runs.

We recommend to make a File Info + Signature rule, but PATH rules would work as well.

3. On the final page select Scope = User and System Processes

Scope Filter should be trimmed to the specific account you specified to run the service runs as.

Tip: It's also possible to use Scope Filter = SERVICES to make the rule apply to all services that run from the specified .exe regardless of the user.