04: How does PolicyPak support (and not support) Windows 11?

For the best compatibility, you should use PolicyPak CSE version 3068 and later when you use Windows 11.

Here’s the breakdown of some specific PolicyPak components which you might want to learn about with regard to Windows 11.

Internet Explorer is absent in Windows 11, but there is “IE Mode” within Windows 11 and Edge.

IE mode still generally supports the following constructs and ideas (which you may be using with PolicyPak):

The updated behavior with Windows 11 and CSE version 3068 and later is that routes requested to go to IE should go to IE in Edge mode when possible.

The general rules are as follows:

If you have an explicit route to a URL and specify Internet Explorer, PolicyPak Browser Router will attempt to invoke IE in Edge mode. An explicit route could be something like https://www.policypak.com/webinar

An example can be seen below. Note it doesn’t matter if the pulldown is set for “Open in standalone IE” or “Open as IE in Edge tab” is set. Those settings only matter for Windows 10 and are ignored in Windows 11. 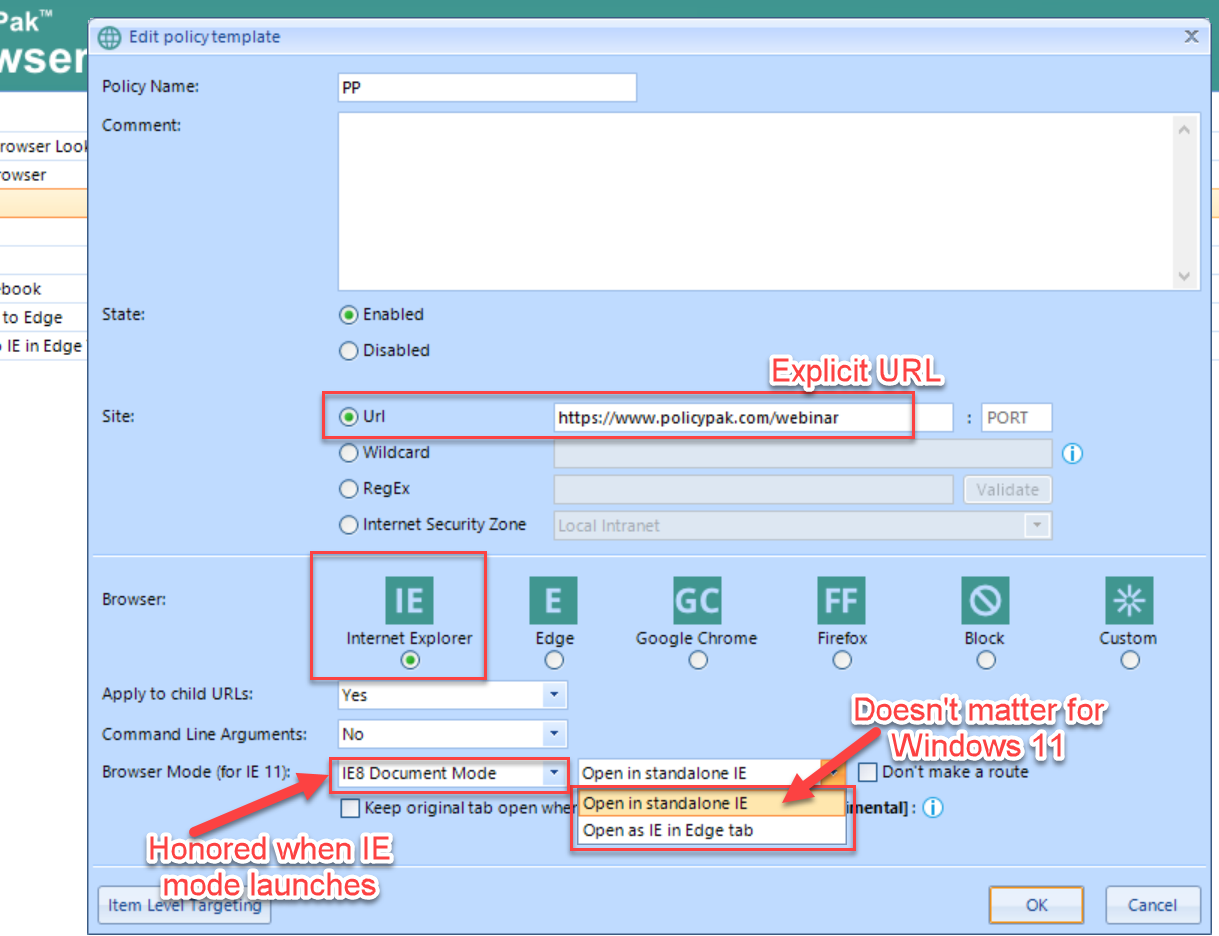 Example 2: Using Wildcards (or RegEx or Internet Security Zone) and attempting to set the browser to Internet Explorer

Since there is no IE 11 in Windows 11, existing routes set like what’s seen here cannot work as expected.

Starting with PolicyPak CSE 3068 on Windows 11, PolicyPak Browser Router will route these to the Default Browser. 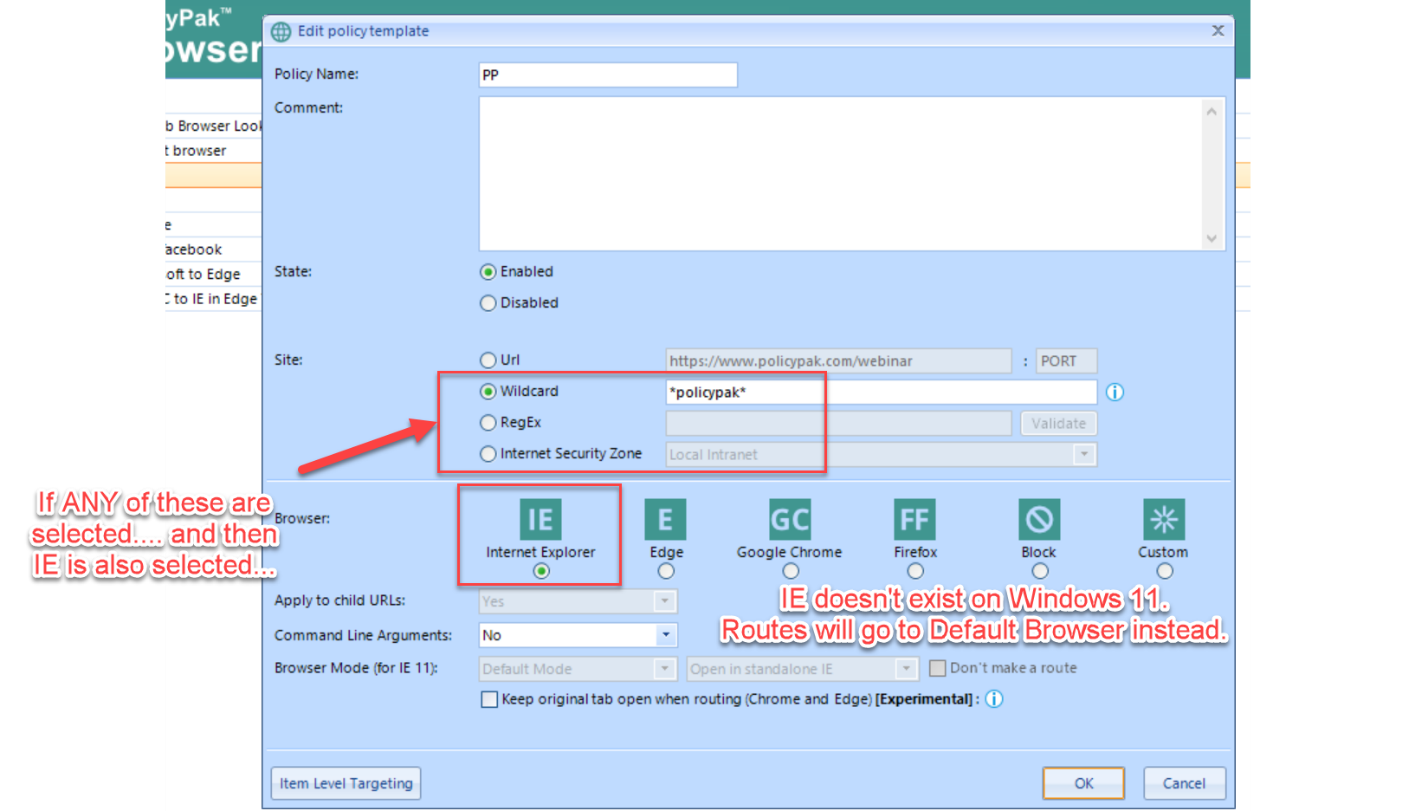 How are Default Browser Policies handled (With Windows 11)?

Note there is a PolicyPak Browser Router policy to set Default Browser which you might have already set. Windows 11 and PolicyPak CSE version 3068 and later will see this and make a decision accordingly if you’ve set this to Internet Explorer.

Note: Windows 10 will honor the “Internet explorer” setting, but Windows 11 needs to have a plan. 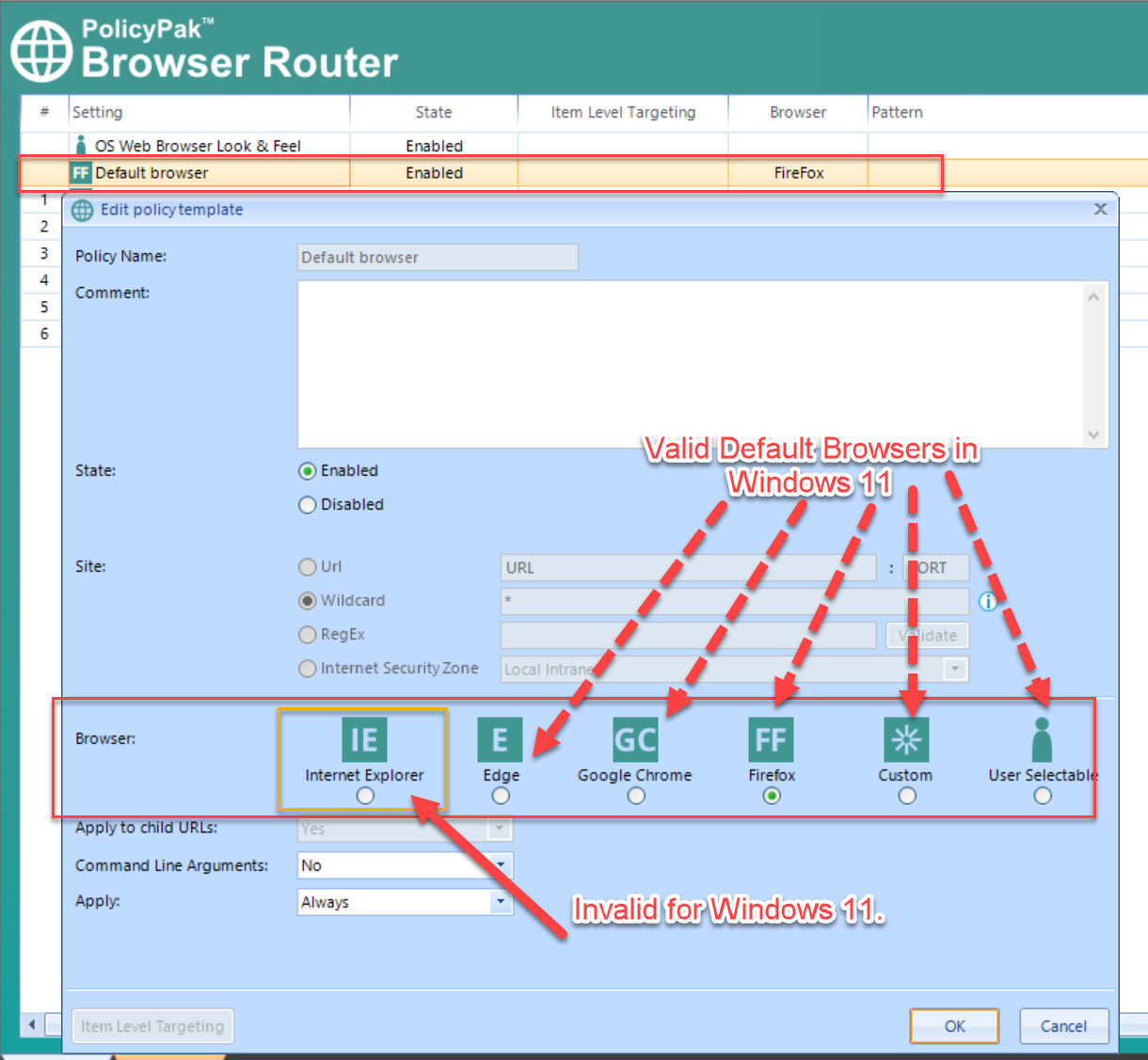 First, to start, managing the Taskbar with PolicyPak for Windows 10 and 11 is exactly the same. And you can use PolicyPak Start Screen & Taskbar manager today to manage the Windows 11 Taskbar.

However, managing the Windows 11 Start Screen is another story.

For Windows 11, there is not currently a good way to manage the Start Screen with PolicyPak.  While we could build something here, Windows 11 itself only supports the following very specific scenario:

These differences are hardcoded into Windows 11 vs. Windows 10.

So we would love to build this, if and when the internals of the Windows 11 Start Screen are changed to be programmatically manipulatable.

PolicyPak VPN Manager with Windows 11 should work as expected; except sometimes it doesn’t.

This is not a PolicyPak VPN manager issue, but rather something systemic to Windows 11.

When you use PolicyPak VPN manager with Windows 11, in our logs you can see something like this.

We are awaiting a fix to make this more reliable, but its possible it simply works as expected for you. 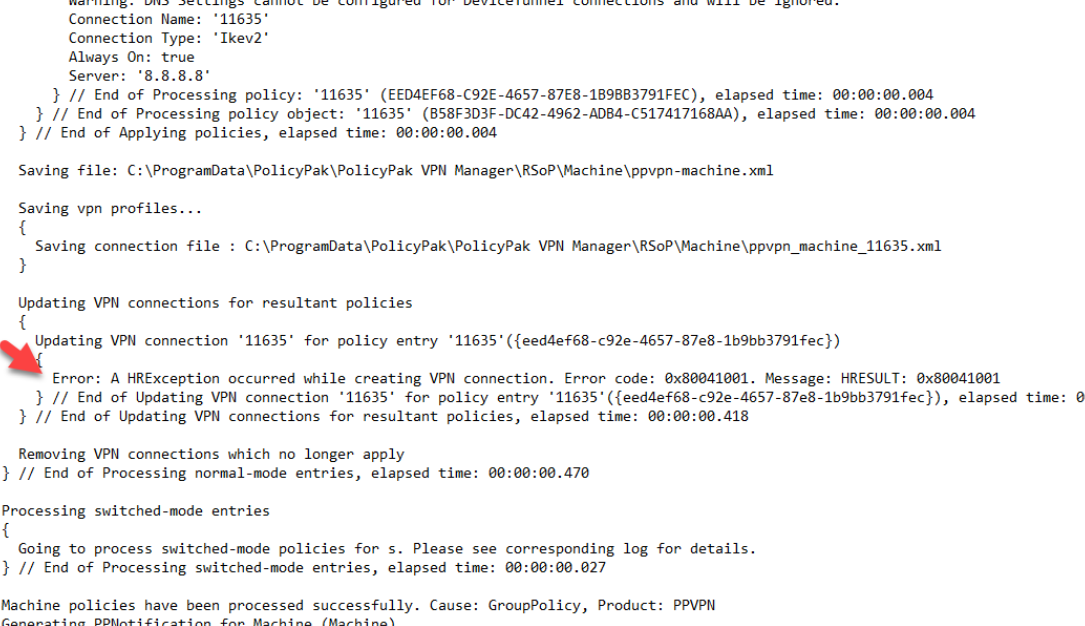 Windows 11 features are available to manage in PolicyPak CSE and MMC version 3068 and later.

No particular Windows 11 changes or incompatibilities.

If you were to use an older CSE you shouldn’t see any incompatibilities or any differences.

That being said, we always recommend you use the latest CSE as fixes and updates occur regularly.